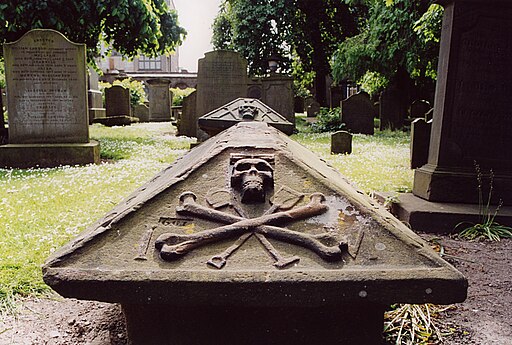 It never struck me as strange, growing up, that smack in the city centre of Dundee there is a graveyard. But then I also grew up next to an undertaker so I was used to the idea of dead people from an early age.  When you think about it, it’s an odd thing, that right in the middle of town there’s an ancient burial ground. There’s a few, actually, but the others are attached to churches, which always makes them seem more proper. The Howff, on the other hand sits across the road from the DC Thomson offices. A stark reminder in these grim days of the slow, painful death of print media.

There was a church there once. A monastery to be exact, founded around 1260. A fact that will surely boggle the minds of most North Americans. Originally the gardens of Grey Friar’s monastery it was granted to the town as a burial ground in 1564 by Mary, Queen of Scots because apparently the stench of the burial ground outside St Mary’s church was too unbearable. Anyone wanting to make a comment about how this says a lot about Dundonians and their predilection to not washing and therefore being immune to stench would be well advised to hud their wheest.

The name comes from the fact the Nine Incorporated Trades used to use it as a meeting place, or Howff in Scots. Documents from the time mention that each Trade had a tombstone that they liked to gather round for meetings and on which the Deacon in charge of the Trade would sit. They paid rent to the town for the privilege of doing so. As well as their individual areas the Trades would meet together at a specified area where the “Convener’s Stone” stands. This stone also has dubious and unproven connections with the last witch executed in Dundee, Grissell Jaffrey, who was strangled and the burnt at the stake in 1669. People still leave offerings for her on this stone to this day.

It would be a shame really to set a book full of supernatural doings in Dundee and not bring the Howff into it. So I buried the protagonist, Moira’s, late lover there.

The Howff stands in the centre of Dundee. It is the dark, mossy heart of the town. Flanked on two sides by the unadorned walls of old tenements it seems rarely to get sunlight and rots away in a green, damp fug. Moira scaled the locked gates and walked up the pathway straight in front turning once right and then left before stopping at a worn chunk of stone. While in better condition than those surrounding it, it still showed the wear of 269 years under the east coast elements. Rain, sun, wind and the rub of Moira’s fingers had all worn away the writing that once marked it to be John Gordon’s final resting place. As she stood before it her only thought was his face, the joy it would be to see it again. The propriety of raising the dead was not something she’d ever worried about. Nor was it something she’d ever had a problem with before but as she stood there, hands out stretched, the energy crackling as it hit the ground, calling him from the Underworld, nothing happened.

She screamed in anger, and the sound resounded off the buildings, sending pigeons into the air and causing windows to break.

Again, she tried and again nothing happened. In the midst of her rage, she wondered if she needed to eat more but before she could decide a shadow appeared on the pathway to her right. Her heart leapt and his name formed on her lips but she held it back just in time. The shadow stood taller than John, broader in the shoulders. But no less familiar to her.

For more on the Howff check out:http://www.cms.dundee-howff.info/index.php/history

And for more of Grissell Jaffrey take a look at the awesome Dark Dundee site: http://www.darkdundee.co.uk/people-politics/grisselljaffray/